If you enjoy traveling and riding your bike, there are several things that you can do. You can look for excellent parks that you can write around or back trails around lakes and campsites. However, if you are the type of person that enjoys riding bikes around the city because you prefer that type of locale, here are a few strategies you can use in order to find the best bike-friendly cities and three of the best ones.

How To Find Bike Friendly Cities

What most people will do is they will search for these companies that provide reviews for people that like to travel. Some of them will be about campgrounds, whereas others will be about places that you can go hiking or fishing to name a few. Others will focus on where you can go bike riding, and these will be divided up into natural parks and cities. If cities are what you are looking for, you will find that many of the cities that are in the top three are going to be the same. 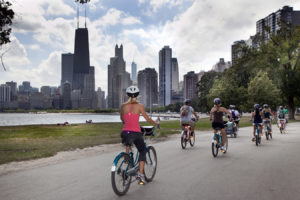 One of the reasons for the popularity of bike riding in Chicago is that over 100 miles of new protected bike lanes have been created. This was based upon a promise that was made by the mayor of Chicago, one that he lived up to prompt much more people to ride bikes. It is not just the new bike lanes which take you into the downtown area, but all of the bike lanes that circumvent the city. It really is one of the most beautiful cities in the United States, and you can see all of this from your bike courtesy of these new protected bike lanes. 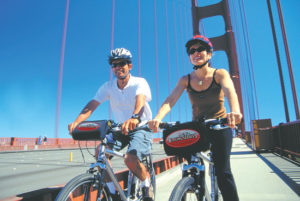 Another city that has added a substantial number of bike lanes in San Francisco. This city, one of the most iconic in the world, is one that you can safely bike ride courtesy of these new quality back lanes. One of the most popular destinations is Market Street where there is a bike lane, one that has clocked over 1 million people. There are many others such as on Masonic Avenue, and there will soon be a protected bike lane on Second Street that people can use. 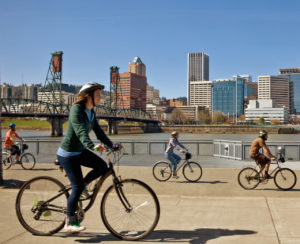 Portland is located very close to Vancouver, Washington, and both of these cities are absolutely iconic. Each one as a multitude of bridges used to cross the rivers, and it creates an incredible landscape of modern architecture. One thing that inspired many people to begin bike riding more was the bridge over the Willamette River. It is a destination that you should visit anyway, and if you can bring your bike with you, or rent a bike, it’s well worth cycling around the city.

Other Top Contenders To Consider

A few of the other top contenders include New York City, Seattle in the state of Washington, and Minneapolis. If you haven’t been to Texas, a great place to start is Austin where you can ride over the Colorado River, and there is also the beautiful city of Cambridge in Massachusetts. Regardless of where you go, there will always be places where you can do safe bike riding. The top three that have been presented are places you should consider traveling first if this is a hobby that you have decided to embark upon.

These are just a few of the many cities that are considered to be top contenders for the three most bike-friendly cities. The reason that they have reached this highly coveted position is that of the new protected bike lanes that have been installed. Obviously, places like Chicago which have recently been in the news for crime might not be the best places to bike ride unprotected. However, they have done well, and you can feel safe in Chicago, San Francisco, and certainly in Portland when you decide to ride your bike.

Another great place to rent bicycle and go on bike tours, is Cape Town. Cape Town has an amazing range of cool tours, mountain bike trails, stage races and rental options in and around the city. Cape Town is home to the famous Cape Epic mountain bike race which highlights only the tip of the iceberg in this cycling crazy town. They also host the Cape Argus Cycle Tour, which is now known as the Cape Town Cycle Tour. This event is the biggest timed event in sports anywhere in the world. You can catch both of these events on their satellite TV provider assuming that the Cape Town accommodation you are staying in has a DSTV installation present and TVs in each room.